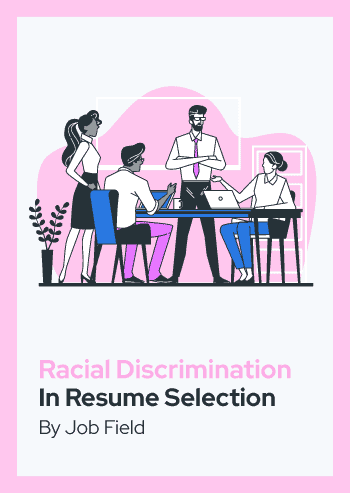 While the argument can be made that discrimination in America has lessened over time, racial discrimination in labor markets have remained an ongoing concern for job seekers who are minorities, as well as for equal opportunity employers looking to create a more diverse work environment.

In an effort to identify to what extent racial discrimination in the labor market still exists today for various job fields, ResumeGo conducted a field experiment from September 3, 2018 to February 8, 2019. A total of 19,200 fictitious resumes were submitted to job openings listed on various job search websites across 8 distinct job fields. To manipulate racial perception, resumes were assigned Black-sounding names, Asian-sounding names, and White-sounding names that corresponded with the race of the intended fictitious job seeker. The callback rates were recorded for each job field and the rates for Black and Asian job seekers were compared to those for White job seekers. This comparison is used as the core metric for gauging the level of hiring discrimination that exists today for these two minority groups.

The overall callback rate throughout for White resumes was 12.9% while the overall callback rates for Black resumes and Asian resumes were 8.3% and 9.8%, respectively. This means that White applicants received one callback for roughly every 8 applications they submitted, while Blacks and Asians had to submit roughly 12 and 10 applications, respectively, to receive a callback. Callback rates are further broken down by job field below: As shown in the graph, White applicants outperformed both Black and Asian applicants by a significant margin for 7 out of the 8 job fields covered in the field experiment. The one job field where this was not the case was technology, where Asian applicants actually performed the best with a callback rate of 11.3%. This exceeded the callback rates of White and Black applicants, which were both 10.4%.

On the opposite side of the spectrum, minorities fared particularly poorly when applying to jobs in finance. Callback rates were only 4.2% and 4.8% for Black and Asian applicants, respectively, while the callback rate for White applicants was 12.9%. Put in perspective, this means that White applicants received roughly 3 times the number of callbacks than minority applicants for the same number of job applications submitted.

Among the 8 job fields covered in the study, technology was surprisingly the only field where no significant level of discrimination was found for either Asians or Blacks. The callback rate for Asian job seekers was 11.3% while Whites and Blacks both had callback rates of 10.4%.

It’s unclear why callback rates for Asians and Blacks were comparable to Whites in only the field of technology. One explanation could be that employers have a far more standardized approach when it comes to hiring for technology jobs. They often more heavily emphasize hard skills compared to most other fields. While outside the scope of this study, the hiring process for technology positions is known to include more technical interviews, which are designed to gauge problem-solving skills and overall technical knowledge and thus leave less leeway for discretionary human judgement. This same pragmatic hiring philosophy is likely to extend to the resume-screening stage of the hiring process.

The common stereotype that Asians are good at math and computer programming might also contribute to why employers are more willing to hiring Asians in technology. While the stereotype does not apply to Blacks, there is the possibility that it could indirectly cause employers to be more open-minded to hiring employees of all races when it comes to technology jobs. This is, of course, all conjecture and would require further research to validate.

19,200 resumes were submitted to jobs in 8 job fields, with the same number of resumes submitted to each job field. Resumes used in the study were created based on those of actual job seekers, but were altered enough to conceal their original identities. Resumes were formatted traditionally, and did not include any photos of the applicant or any graphics at all. The resumes also did not explicitly state the applicant’s ethnicity or race, with the only racial implication derived from the applicant’s name.

Names chosen for the study were intended to have strong implications of racial origin. The study randomly assigned very White-sounding, Black-sounding, and Asian-sounding names to a third of the total resumes each. To address the concern that names can have varying levels of racial implications and also be used by employers to infer social backgrounds, a variety of names were used in the study for the sake of diversification.

Taken at face value, the results of the study suggest that Black and Asian job applicants are still being racially discriminated against by employers in today’s labor market. White-sounding resumes received 43% higher callback rates than Black-sounding and Asian-sounding resumes overall. It’s also important to note that the level of racial discrimination varied by job field as well. From the data, we see that job openings in finance yielded the largest discrepancy in callback rates between white resumes and Black/Asian resumes. However, callback rates of White resumes when compared to Black/Asian resumes were virtually the same when it came to job openings in technology, suggesting no significant level of discrimination in that field.

To counteract potentially being discriminated towards, job seekers who are minorities can consider the option of using resume whitening techniques to hide or downplay their racial affiliation. The two most common resume whitening techniques involve (1) changing the presentation of the job seeker’s name and (2) altering or deleting elements of the job seeker’s work experiences and extraprofessional experiences with racial implications. With regards to the former option, it’s not uncommon for Asians to adopt a more American-sounding first name to use in their job search as opposed to their legal first name. While this method can work for Black job seekers as well, a more common whitening strategy in their case involves using their middle names as opposed to their first name if suited for their intended purpose of hiding their racial background.

In conclusion, while this field experiment only measures callback rates for interviews and therefore does not directly examine whether an applicant actually gets the job and at what compensation levels, the results still indicate that race is an important factor in today’s labor market. Minority job seekers should be made aware of the potential racial biases that await them in their job search and can choose to consider potential measures that will give them the best chance of finding career success. On the other end, employers have the opportunity to acknowledge this issue and come up with measures to ensure a more diverse workplace.

was the only job field to show no racial discrimination