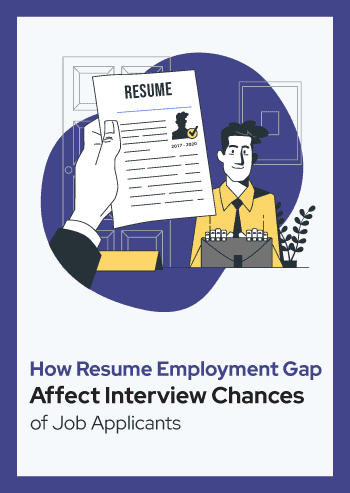 There has always been a negative stigma associated with employment gaps. Those with gaps in their work history run the risk of being seen as lazy or unfocused with their careers, and not as an in-demand asset in the eyes of potential employers. However, while the stigma associated with employment gaps is well-known, precisely how these gaps empirically affect the hiring chances of job applicants is not, with little to no research done on the matter.

To learn more about how employers react to employment gaps and their impact on an applicant’s interview chances, ResumeGo conducted a field experiment from January 14, 2019 to July 5, 2019 in which 36,510 job openings from across popular job boards were applied to using fictitious applicants. The field experiment focused on examining two factors that may largely influence the significance of work gaps:

The callback rates of applicants were recorded and analyzed to gauge how different work gap lengths and reasons would affect an applicant’s chances of being offered a job interview.

Resumes used in the field experiment were created based on those of actual job seekers, with slight modifications made to the names, locations, dates, etc… in order to hide each applicant’s identity, but still fulfill the purpose of the study.

To make the reason for the applicant’s work gap as clear as possible to hiring managers, both the resumes and cover letters submitted include a section that clearly explains the reason for the applicant’s work gap. The majority of resumes were written with objective statements at the top where this was included. The only resumes for which this was not the case were the ones belonging to applicants who purposely chose not to disclose the reason for their work gap. A portion of each cover letter submitted was also dedicated towards relaying this same message to make sure hiring managers did not miss it.

The reasons for every applicant’s work gap were grouped into one of five categories:

A total of 36,510 job openings were applied to. These job openings were found on various job board sites including Ziprecruiter, Indeed, and Glassdoor. Employers were given 60 days after the application submission date to show some sign of interest via email in extending an interview to the applicant.

While the field experiment conducted only analyzes the interview chances of applicants, and does not examine whether applicants were ultimately given a job offer and at what compensation levels, the results clearly show a strong negative correlation between the length of employment gaps and interview callback rates – which was expected. More surprisingly, the findings of the study suggest that once job seekers have been unemployed for over 2 years, their value in the eyes of hiring employers falls sharply, as evidenced by a significant drop in callback rates from a 2-year work gap to a 3-year work gap. Professionals who have been out of the workforce but are looking to avoid this potential hit to their interview chances should position themselves to find a job before that time.

Furthermore, the findings heavily suggest that job seekers with a legitimate reason for their work gap could benefit from disclosing this reason to hiring managers through their resume and cover letter. Work gaps are usually looked down upon by employers because they can mean that applicants are lazy and not prioritizing their careers. By providing a valid excuse for having a work gap, applicants may deter employers from assuming the worst.

While having employment gaps is oftentimes unavoidable, job seekers who are made aware of these findings will not only be more informed of the potential impact, but also gain valuable insight into how to overcome an employment gap.

Applicants with work gaps are

for work gaps of 3 or more years

Providing a reason for a work gap meant